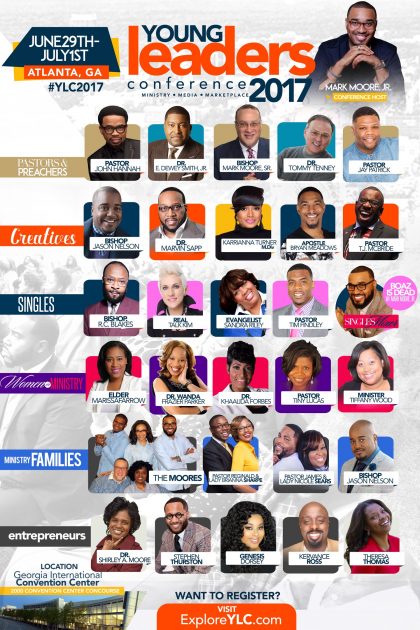 Last weekend I was one of the 1,515 that attended the Young Leader’s Conference (YLC) in Atlanta, GA. There were attendees from 36 states and 10 countries! The first YLC took place in 2015 and only had about 300 people. You could credit the visionary behind the conference, Mark Moore Jr. for the growth, but he would tell you all the glory belongs to God. Mark is the son of Mark Moore, Sr. pastor at Faith Covenant Church in Atlanta. I got to meet both of them over the weekend. Mark Sr. signed his book, Provisions for the Journey I purchased there, and I already own his son’s book Boaz is Dead.
I serve in several positions at my church, but there aren’t many opportunities for me to be poured into so this event was just what I needed. Plus there are few young adults at my church, so seeing so many young leaders from around the world was encouraging. To say it was empowering is an understatement. This was not just a networking, teach you some leadership skills, type of conference. With God at the forefront of each session, wisdom was shared, souls were consoled and anointing overflowed. The worship sessions brought us even closer to Him. Go next year and you’ll see what I mean! I will be unpacking the wisdom for some time to come. I would definitely recommend at the least following the speakers on social media and checking out their resources.

I went a mix of the creatives, singles, and entrepreneur sessions. All sessions were recorded and will probably be available for purchase soon. The worship sessions can be seen on the conference’s Facebook page.

Here are 10 takeaways. I could easily write another post with 10 more!

Login with your Social ID

The Go & Grow Show is a podcast to help you to grow in all areas of life,
but 1st towards Christ!

This error message is only visible to WordPress admins

Bible Verse of the Day

Better a little with the fear of the LORD than great wealth with turmoil.
Proverbs 15:16
DailyVerses.net